Island Peak is one of the most climbed mountains in Nepal, mainly for its easier technical accessibility and lesser altitude.

Island Peak or Imja Tse at 6,189 meters is an Alpine PD+ peak mainly know for the sports climbing.

It was named ‘Island Peak’ by the Erik Shipton’s party in 1951, because it seemed like an island floating in the sea of ice when seen from Dingboche.

Located at the Khumbu region of Nepal; which is also known for possessing Mount Everest, Lhotse, Ama Dablam and countless other peaks, Island Peak accounts for a fairly easy climb and can be done by amateurs as well as experts.

Imja Tse summit was first climbed in 1956 by a Swiss team as a training exercise in preparation for Mount Everest and Lhotse. Since then, it has been climbed thousands of time by hundreds of climbers, mainly for sports, training or serious climb. 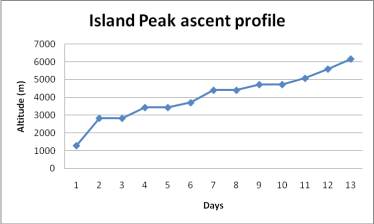 In order to reach the summit you’ll be expected to be able to climb to Scottish Grade II standard (steep snow, possible use of two ice tools, possible difficult cornice exit, but technical difficulties are short) or Alpine PD (some technical climbing and complicated glaciers).

It can generally be climbed during two different seasons. Spring lasts from February to June, and Autumn lasts from September to November.

The place can be really crowded during these two occasions, and most climbing takes place in groups to avoid hassle. It’s easier to climb the Island peak compared to most other smaller peaks, and is generally completed within a day, however, one must need to comprehend the basic skills of ice-axing, cramponing and staying fit. Trekking can be a great opportunity to get in shape and imbibe the local environment for the climb. 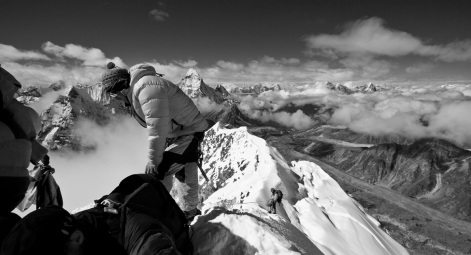 Seen from the summit 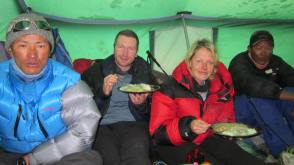 Inside a camping tent at Island Peak

One thought on “The Island Peak”