Bishazari Tal is a local heritage and a popular tourist landmark of the Chitwan National Park. A designated Ramsar site is home to many wildlife and endangered species.

The Bishazari Tal, literally translates to 20,000 Lakes in English. Also spelled as Beeshazar Tal, it is an extensive oxbow lake system inside the Chitwan National Park in the Terai of Nepal. The designated Ramsar wetland covers an area of 7,900 acres.

A popular tourist destination lies in a close distance to Sauraha. It can be visited during or after the Jungle Safari.

The first national park of Nepal is one of the most popular tourist destinations in the country, and is home to some of the most endangered species of animal.

The southern plains of Nepal is known for its lush green vegetation, variety of yielding crops and wildlife. More than 150,000 tourists visit the park annually. It has a tropical monsoon weather which permits regular rainfall in the area throughout the year.

The massive hunting expeditions organized by royals members of Nepal, officers of British empire and other hunting enthusiasts during the 19-20th century caused most of the mass depletion of some of the exquisite animals from the region. Today, it acts as a home and buffer-zone for such endangered species. 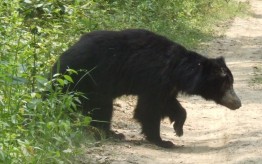