Pashupatinath Temple of Kathmandu is one of the holiest Hindu shrines in the world. A sacred place dedicated to Lord Shiva congregates more than 800,00 pilgrims during the grand festival of Maha Shiavratri. It is a popular tourist destination in Kathmandu.

The term Pashupatinath stands  for “Lords of all animals.” The temple is dedicated to Lord Shiva (One of the Hindu Trinity) and also known as the lord of animals. A stone bull in a crouching position marks the insignia of the temple.

It’s located at the heart of Kathmandu. The area of Pashupatinath encompasses 264 hectares of land including 518 temples and monuments. Due to its historical and social importance, the entire site was added in the UNESCO Heritage Site in 1979.

The Maha Shivaratri is the major festival of all Hindus in South Asia which is celebrated with much awe inside Pashupatinath temple premise. It attracts over 800,000 visitors in a single day, one of the highest religious congregations in the world. Thousands of visitors, including; pilgrims, devotees, tourists, visit the temple everyday.

An animal sanctuary was established inside the area to protect the indigenous wildlife of the region. Antelope and other few animals reside inside the sanctuary; and it is open to tourists.

There isn’t certain date signifying the origin or creation of the temple. The earliest evidence of the temple dates back to 400 AD. The current temple was constructed or renewed in the 15th Century by the Lichhavi king of Kathmandu. Since, then many renovations have taken place; along with many temples, shrines built inside the premise.

There are many legends to the creation or origin of the temple.

Lord Shiva once took a form of an antelope and started roaming around Bagmati river. The Gods seeing this, caught him by his horn and forced him to take his self form. The separated horn was revered and prayed as the Linga. Centuries later, a herdsman found the linga buried inside the earth. Sine then, the shrine was established to pray to the Linga.

When the Pandavs went to the Himalayas, Shiva tried avoiding them because they killed many people in during the Mahabharata war. To avoid them, he ran away in the form of a Bull. On being followed, the colossal Bull dived into the ground to resurface at other places. He left his hump at Kedarnath. When he resurfaced, he had assumed a human form and emerged at different areas in these mountains. His Face resurfaced at Rudranath. His Arms resurfaced at Tungnath. His Naval emerged at Madha Maheshwar. His Hair emerged at Kalpeshwar.

There are many other theories to the origin of the temple, which today are part of the popular folklore’s.

The banks of Bagmati river passing through the temple also serves as the cremation ground for the locals. Known as Arya Ghat, it is considered important mainly because the Ghat is the only place around the temple where the water is considered sacred enough to be brought into the temple.

You may witness people cremating their family or relatives at the ghat almost everyday. You can visit the site  during Kathmandu Day Tour. 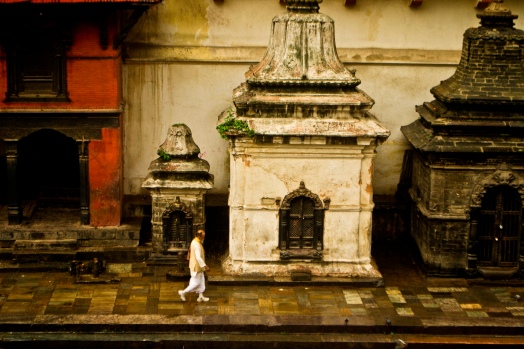 Arya ghat, where bodies are cremated

Macacque monkey seen around the temple