Khaptad National Park is a protected area located in the far-western Nepal. It was named after the renowned saint Khaptad Baba, who made it his home. It lies far from Kathmandu and many other cities, hence, the local culture and lifestyle inside the park remains well preserved.

Khaptad National Park is a protected region and a national park located in the far-western region of Nepal. It was established in 1984 and falls under the IUCN Category II. The national park spans 225 km2 and covers four different districts; Bajhang, Bajura, Achham and Doti.

The area also attracts the Hindu pilgrims during the Janai Poornima, which falls on July-August. The pilgrims arrive at Khaptad Baba Ashram and stay overnight to observe the full moon; they then worship Lord Shiva.

The park contains Chir pine at lower altitude, and sub alpine forests of fir, hemlock, oak and rhododendron in the higher areas. It also boasts 224 species of medicinal herbs.

It is estimated that about 567 species, 11 percent of flowering plants of Nepal, are found in Khaptad.

The park was named after Khaptad Baba. It was on his advice, that the state decided to establish a protected region. Khaptad Baba or the Late Swami Sachchidananda moved to the area in the 1940s to meditate. He lived 50 years as a hermit and became a renowned spiritual saint. Many devotees visited him during the heyday.

Another major religious destination inside the park is the Badimallika temple. The temple is dedicated to Mallika Devi. It is believed that Goddess Sati, Shiva’s consort, was reborn as Parvati in this holy area. 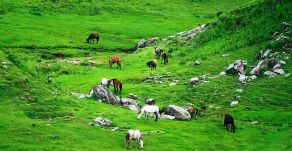 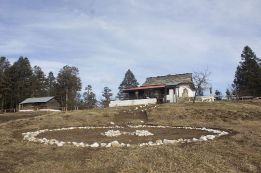