Machhapuchhre or the Fishtail is also known as the virgin peak because no human has ever conquered its summit. There are many stories and folklore in Nepal dedicated to the mountain, however, very few of them clarify why the peak has never been climbed.

Machhapuchhre standing at 6,993 meters is one of the small peaks of Nepal. It is popularly known for its majestic and unadulterated beauty, and the unique geography of its summit which gave its name ‘Fishtail’. 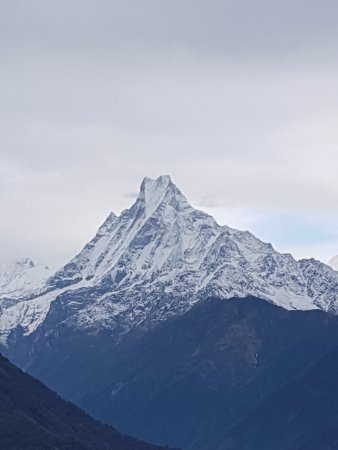 The peak lies just opposite the Annapurna massif and is closely connected to the Hindu God Shiva. It is believed among the Hindus that Shiva lives atop the mountain hence the peak is forbidden from climbing.

The trekkers doing the Annapurna Base Camp Trek must pass through the Machhapuchhre Base Camp. The peak from the base camp is up close. It is also seen from Pokhara, a tourist city located 23 km away from the mountain. The peak dominates almost every photo taken at the Pokhara due to its promising visibility.

It is generally believed that the peak hasn’t yet been climbed because it holds an important religious position among the Gurung inhabitants of the region.

One popular story goes as such;

In fact, it was a member of that expedition, one Wilfrid Noyce, who came the closest anybody ever has to the summit on a 1957 expedition. The king of Nepal had asked Noyce to respect Hindu religious customs and not set foot on the summit. He and his climbing companion, A.D.M. Cox, turned back 150 feet short of the summit. This expedition produced the only climbing record of this mountain, a very rare book called Climbing the Fish’s Tail.

However, the reason for not being able to scale the peak is more personal than religious. Col. Jim Roberts, a British Gurkha officer who led both the reconnaissance (1956) and expedition (1957) teams to the mountain, had to retreat just 45 meters short of the summit due to heavy snowfall.

Col. Roberts happened to be Military Attache at the British Embassy in Kathmandu and it is not difficult to imagine that his sentimental advice to the Foreign Ministry (that handled expeditions) regarding Machhapuchhre’s sanctity influenced the fate of the mountain. ref

Dr. Harka, along with other stakeholders of tourism industry, believe that the mountain should be opened for the climbing, whilst more employment can be generated.

In his memoirs, Col. Roberts mentions,

So Machhapuchhre became for me the ideal mountain, a personal possession yet out of this world, unattainable but mine by illogic right, brooding over a country and a people which will shape the rest of my life.

On the way to Choomrong, Machapuchare rises above the forested ridge.

Double-fluted peak of Machepuchare with the steep rock and snow flanks.

Pokhara with Machhapuchhre in the background
Advertisement